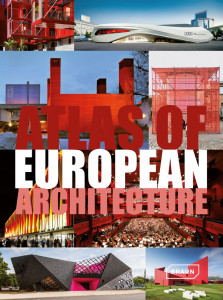 Europe has always been a continent of cultural diversity, a fact that is particularly reflected in its art and architecture. However, the appearance of European cities is not only shaped by traditional and local building forms, modern European architecture has also added a wide scope of constructional styles. These are influenced in equal terms by regional factors, such as the multifarious climatic and landscape zones of the continent, and international trends.

This volume presents European architecture in all its multitude – from private residences via residential and office complexes up to cultural, educational, research, and religious institutions, and infrastructure projects. Unexpected materials and modern designs are presented along with new interpretations of centuries-old building traditions, while modern building methods focus on highly topical themes such as sustainability, re-use, and recycling methods. The compilation of buildings from such a wide scope of typologies makes this compendium not only a comprehensive general reference work but primarily also a nearly inexhaustible source of inspiration.