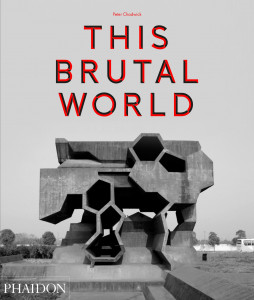 A curated collection of some of the most powerful and awe-inspiring Brutalist architecture ever built This Brutal World is a global survey of this compelling and much-admired style of architecture. It brings to light virtually unknown Brutalist architectural treasures from across the former eastern bloc and other far flung parts of the world.
It includes works by some of the best contemporary architects including Zaha Hadid and David Chipperfield as well as by some of the master architects of the 20th century including Le Corbusier, Mies van der Rohe, Frank Lloyd Wright, Louis Kahn, Paul Rudolph and Marcel Breuer.

Peter Chadwick is a London-based art director and graphic designer. Peter studied design at the Chelsea School of Art, emerging at a time when the worlds of music, fashion and graphic design became inextricably linked, and went on to work at Creation Records (the most successful independent record label of the 90s) where he designed for chart-topping bands including Primal Scream and Spiritualized. After setting up his own studio, Zip Design, in 1996, he masterminded campaigns for major artists such as Groove Armada, Girls Aloud, Fatboy Slim, dance-music brands Cream, Bugged Out and Hed Kandi. Peter is also the author of the popular This Brutal House twitter account (@BrutalHouse) and is a super-fan of Brutalism.

"In a world where architecture is mostly wafer-thin curtain walls or brick slips, the thickness and roughness of brutalism is catnip" —Icon
"A love letter to all things stark, imposing and concrete... catalogues the ugly-beauty of the globe's Brutalist buildings" —Sunday Times Travel
"A wide and celebratory view of Brutalism, redefining and expanding the term 'Brutal' to include buildings usually considered outside the movement. ...The book demonstrates the international reach of Brutalism... [and] the ongoing influence of the movement today" —Architects Datafile
"A celebration of controversial concrete." —Atlas Obscura "Even if you don't go anywhere in May, be sure to read this... black-and-white images as provocative and jarring as their subjects" —Conde Nast Traveler